We asked, you answered! Our April Player(s) of the Month criteria called for players to nominate the “host with the most” for the chance to earn the POTM title. While our past POTM have seen a wide berth of players awarded for their Munzee contributions, we decided to narrow down our April POTM finalists to include players with the most votes. However, we’d like to make it clear that many hosts and cohosts were nominated, and we appreciate all players who take the time and effort to host Munzee events and bring players together. With nearly 200 nominations, it’s clear that many players feel the exact same way! 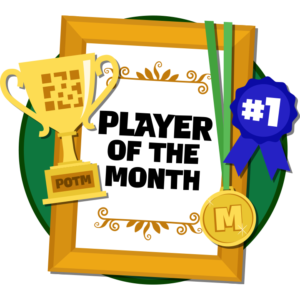 Of course we needed our Global Events Manager Louise to help weigh in on the many nominations. Congratulations to the following players who were both nominated and hand-selected by Louise to be the April Players of the Month:

Remember, anyone who earned the Player Of The Week badge previously IS able to earn the Player Of The Month badge as well! Each month we announce a different set of criteria to award some of the many players who make Munzee so great. Stay tuned for our May POTM criteria announcement! Who knows, you might just be a winner. 😉

What was the best Munzee event you ever attended? Let us know on Facebook, Twitter, or Instagram! Thanks to all who sent us their nominations, and a big thank you to each and every one of you who have hosted or co-hosted an event. And if you’re looking for the chance to get together with a bunch of players and earn some extra points, remember Munzee’s birthday is on the horizon! And it’s not a birthday without a party! 🥳

Congratulations, and Munzee on!