Calculate Your Pumpkoin Balance with this NEW Mech!

In our first Pumpkoins post, we mentioned that another tab in the Redeem Store would appear later on. As planned, this tab contains items that will remain available through 02:30 MHQ on Thursday, November 3rd (the expiration date we had set for Pumpkoins) — so you don’t need to worry about them going away like the items in the [Pumpkoins (Week X)] tab (which swaps out on 12:00 MHQ every Friday)!

The main change you’ll notice is that this new tab is limited to Premium members only.

Currently there’s only one item in there right now, so here’s everything you need to know!

Like the other Munzee Mechz, Count Calcula is a temporary POB that will remain on the map until it has been captured 5 times. At 12:00 MHQ today, it was made available in the Redeem Store in the [Pumpkoins Surprises] tab for 25 PC. If you decide to make the trade, a Count Calcula will be automatically deployed on your account at once! You will also receive the Blueprint to rebuild it when you have earned enough Cogs in the future.

You can find these toothy tools flying to the landing pads above every 6 hours or when captured.

Count Calcula will be available for multi-capture. That means players can capture a Count Calcula on their own munzees, any previously captured munzees, and more than once if the same Count Calcula visits you. Count Calcula is non-blastable. He will be attracted to both Physical Magnets and Virtual Magnets. You can access him by turning on your “All Expiring Specials” filter.

When a Count Calcula is captured, it will scatter up to 3 BATteries.

These scatters will be visible to any player and will be deployed on the Mech owner’s account. This means that unlike Air Mystery Feathers/Boulders, there are CapOn points for the owner!  They expire after 120 minutes, have a capture radius of 300 feet, and you’ll be able to use Rover Treats to capture them as well. These scatters will NOT count for deploy streaks, ZeeOps, or clan activity since they are passive deploys.

Deploying a Count Calcula will earn you the corresponding Blueprint badge, which you can see below. There is also a badge that you can earn by capturing a Count Calcula — but since there’s only one badge in this line, we’ll keep it a secret for now. 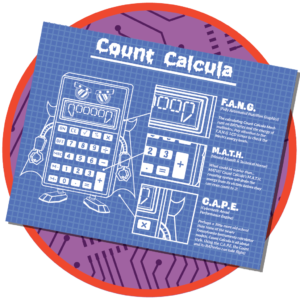