Did You Get Our Invite? More 10th Annual Award ZEEson Ceremony Details!

We first posted our invitations yesterday on social media to give you a heads-up — now we have a few more details filled in! 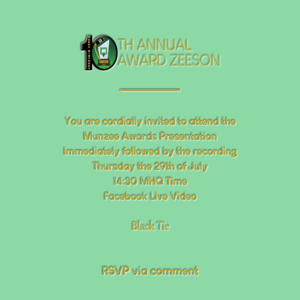 We’ll update this section after the LIVE video is over — we want to keep it a surprise for now!

Don’t think these are the only awards we’ll be handing out! We have 3 more awards currently planned, which we’d like you to vote on. 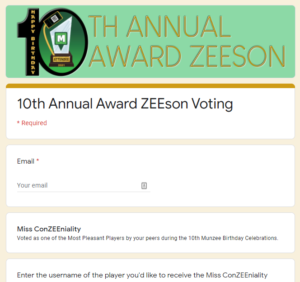 Head to the Google Form HERE! Unlike our other nomination Google Forms, this should be limited to one submission per person. We’ll keep the form open at least until the end of Birthday Events, which means some time during our workday on September 8th.

We are also brainstorming more fun and interesting honors to bestow in the 10 months following our 10th birthday — in particular, ones that feature newer players, as more established players have certainly had an advantage in the awards we’ve come up with so far.

It’s hard to predict what the criteria will be, so just keep playing your way and

Can you believe MHQ Bash is only two weeks away?! Amid a hectic week of planning and announcements, Rob and Matt took the time to sit down and catch up with players! And, of course, they had to spin the IRL Prize Wheel for the first time! If you missed the video, you can catch it in full below!

Don’t have time to watch the whole thing? We’ve got you covered! Below you can find timestamped points of interest to help you decide what to watch:

Thanks to all who tuned in, and be sure to tune in next time for the chance to potentially win! See many of you at Bash!

Rob and Matt have both concluded a busy July full of travels, and they’re sitting down to catch up! If you didn’t have the chance to tune in, you can watch the entire video HERE!

The following timestamped guide can help you skip to points of interest:

Stay tuned for our next broadcast!

Rob and Matt sat down for a videocast today to cover a variety of topics before Rob departs for the month of July. If you didn’t have the chance to tune in, you can watch the entire video HERE!

The following timestamped guide can help you skip to points of interest:

Stay tuned for our next broadcast!

Happy Friday, Munzers! If you’re not in the loop, we just concluded our second Facebook Live stream of the year. This monthly video cast is an opportunity for us to share what’s new at MHQ and in the world of Munzee, as well as address player questions.

Our second live stream touched on a number of topics, including our recent Banshee Munzee, 4.0 updates, our upcoming April fitness initiative, St. Patrick’s Day specials, and more. We also selected six players for prizes based on a random Facebook draw, as well as one player who submitted a helpful tip. Congratulations to valmie, zeroXC, yida, robelwilson, WiseOldWizard, and BigBill54 for winning some prizes from Rob!

If you missed the live stream or just need some more Rob and Matt in your life, click the link to watch it all unfold!

Happy capping this Saint Patrick’s Day weekend! Enjoy your green beverages responsibly with a side of Munzee.

The Munzee Podcast is back for 2018! Rob and Matt say THANK YOU to January’s specials, briefly chat about the latest Munzee update and do their very best to confuse our players about what’s to come next. Enjoy!

The Munzee Podcast is back for its final show of the year! Rob and Matt recap 2017’s hits and misses, hint at what’s to come and invite a couple special guests to give some updates regarding our other games.

The Munzee Podcast is back after a very busy September! Rob and Matt recap MHQ Bash, reveal a fiendish Friday the 13th fellow, and warm up for the Tour De Cure charity race. Stay tuned for a reveal about what’s coming up for the rest of October!

The Munzee Podcast is back again- and it didn’t take us another year either! This month Matt and Rob recap their trips during Birthday month, Louise gives us the rundown on Birthday Events from Jolly Old England, and we go over some of the new items that have been released. Enjoy and Munzee on!

We’ve brought back the podcast/videocast!

With a lot more space for fun activities in MHQ 3.0, we’ve set up an awesome podcast studio! We figured we should probably get around to using it though, so what better time than for some Birthday Month announcements? We had a few technical difficulties at the beginning (give us a break, it’s been a while since we’ve done this!) but the audio quality gets a lot better about 40 seconds in.

Watch the video below and enjoy!