NOTE: There are currently Clans created for testing purposes listed on the leaderboard in the app. These test clans will be removed at 00:01 on 10/3/2019. Please do not join these clans as they will not be active for the next Clan War battle.

We’ve been hinting at our Clan Wars system update for a while, with the launch of our Beta testing, the revelation of new badges, and the unveiling of our new Clan Wars logo. But the day has finally arrived that our Clan Wars update is ready to officially launch! While there are many exciting changes to explore, we’d like to warn players that there is a lot to process. So before you feel overwhelmed, know that we have extensively mapped out all aspects of Clan Wars on our Help Guide for comprehensive reference!

These updates are all implemented to support our goal of making Clan Wars more accessible and flexible to a wider variety of players. Our aim is to create a Clan Wars experience that is in line with our Munzee mission to “Play Your Way!” These Clan Wars updates now make it easier for more players to join in on the fun and participate, while current Clan Wars players can still compete at their own pace.

That means that low level and elite clans alike both have the opportunity to reap the benefits of our updates, with the ability to earn all new badges and customize the way you play! Ready to get started?

In our mission to create a Clan Wars experience that our players can customize to suit their gameplay goals, clans with less than 10 members can now earn rewards in battle! This is one of our biggest gameplay changes that allows for a wider variety of clans to enter the battle and receive rewards. Requirements for smaller clans will be the same as 10 person clans, so smaller clans will need to do more work to complete each level.

Another exciting update is that rewards can now be collected immediately after your clan reaches the next level, instead of waiting until midnight for them to be sent. So, if a player joins a clan mid-battle, they will receive rewards for any levels achieved through their previous activity during the battle period. If the new player is at a lower level than their fellow clan mates, then the rest of the clan will still retain their rewards and simply have to wait for the newest clan member to catch up before leveling up.

As we mentioned, the Clan Wars experience is now moving in-app, where clan members will have comprehensive access to the Clan Wars experience. This is an over-the-air update, meaning that players will not have to download any newer version of the app to gain access to the Clan Wars features. However, players might have to force quit and restart the app if they do not see the new Clan Wars features. It is also essential to make sure that you are playing on the latest version of the Munzee app. 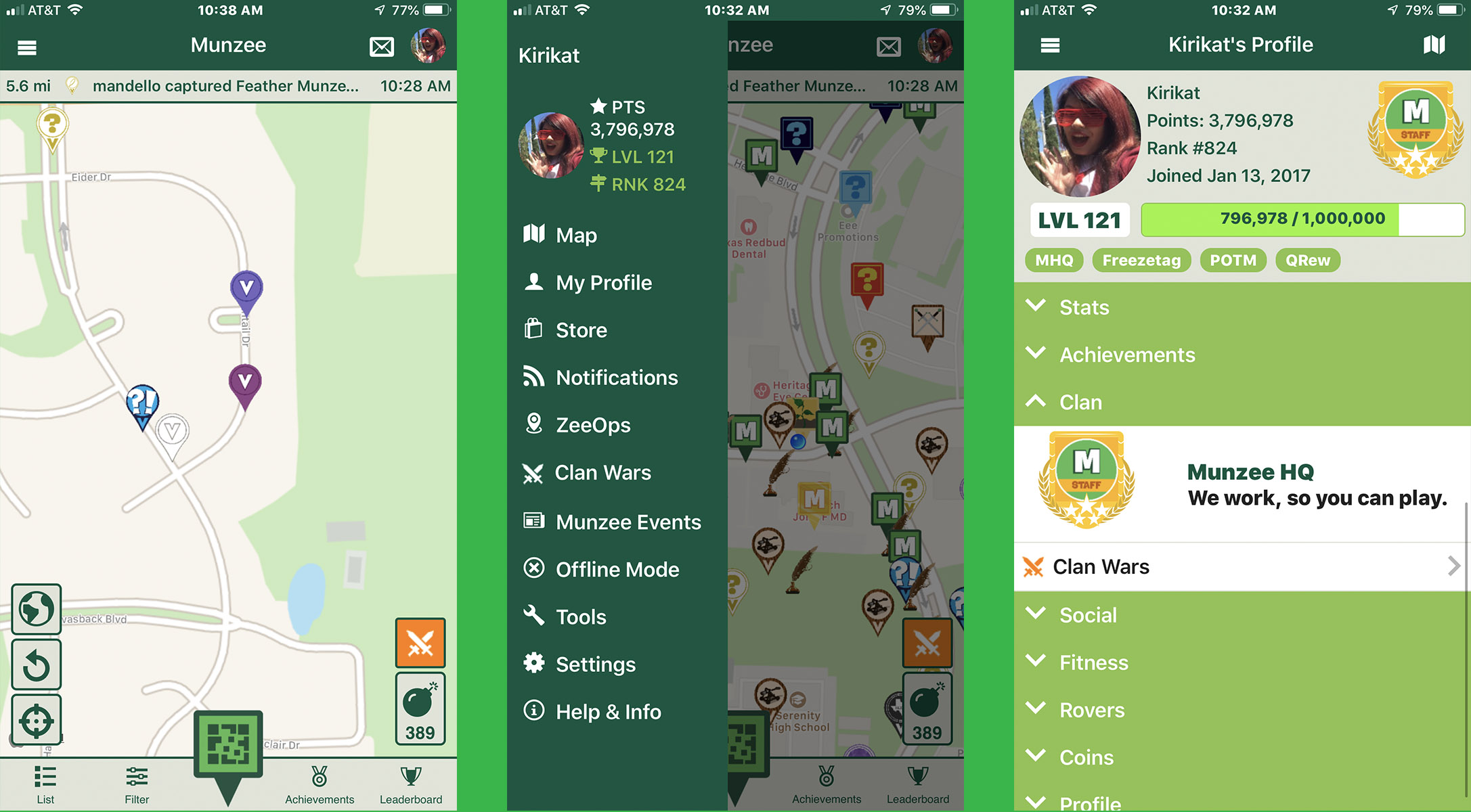 The following features are now available in-app for Clan Wars in the new Clan Wars Hub:

The Roster Tab, which contains the following:

The Challenges Tab, which contains the following:

The Clan Chat Tab, which contains the following:

The Leaderboard Tab, which contains the following:

Another aspect on the in-app Clan Wars update is the new clan settings. Clans can now set a publicly visible goal to indicate what level their clan is aiming for each month. In general we believe there are two different types of clans:

Clans can also now choose a privacy level that will make their clan public, private, or hidden for those who are using the app to search for a clan they want to join. These different settings are as follows:

When joining a clan, players can browse for clans to join using the app and can sort them by which level they are aiming for that month. They can use the search option to find specific clans by name or tagline or use the randomizer to browse through clans to join. If you want to recruit more local players to join your clan, putting the city/state/country in your tagline will help them find you when searching. For more information about this process, you can access our article for How to Join a Clan.

Additionally we have updated the Clan Leader System. Moving forward with the new system, the player who creates the clan will be assigned as the Leader. Leaders can then promote other members to help manage the clan. Note that anyone can be promoted to Leader, even players who don’t have a Premium Membership.

This also means that all existing clans have been transferred to the new system. Since the old system made any Premium Member an admin, and did not track when players joined, all current admins will be assigned as Leaders in the new system. Clans can then decide who to keep as leaders and demote the others to members.

In addition to these new updates, there is now the opportunity to earn badges for achieving certain ranks on the Clan Leaderboard. As we revealed in our October 2019 Clan Requirements blog, there are also badges you can earn each month for every level you reach with your clan. Additionally, new themed borders will now appear around your clan image, with a number of stars to indicate and show off the current level of your clan. They appear as follows:

Once again, we know that these updates might seem overwhelming at first, but our new Clan Wars section of the Help Guide contains comprehensive information expanding upon each aspect of Clan Wars gameplay. In the Help Guide, you can access articles on Clan Wars FAQs, Intro to Clan Wars, How to Join a Clan, How to Complete Challenges, How to Create a Clan, How to Manage Your Clan, and Clan Wars Hub.

Welcome to a brand new era of Clan Wars! We’re excited to see a wider variety of clans compete, and as always, feel free to play YOUR way!