It’s almost time for the third icon adjustment for our Coupe du Munzee specials! Following the Round of 16 game update, which saw eliminated teams reduced to 1 icon each and advancing teams increased to 30 icons each, there will be another map change on Thursday, June 27 at 00:01 MHQ time to mark the Quarterfinals! 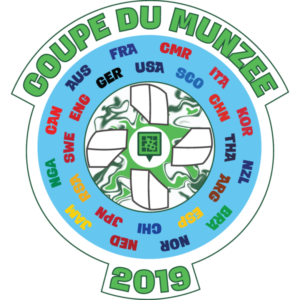 As the Women’s World Cup moves into the Quarterfinals, 8 more teams have been eliminated. That means that there will only be 1 physical icon per eliminated team on the map. However, your odds of capping one of the advancing teams just went up! All 8 advancing teams will see their icons increase to 50 per team!

The 8 advancing Coupe du Munzee teams, reflecting the results of the Women’s World Cup, are as follows:

The following teams have been eliminated in the Round of 16 and reduced to 1 physical icon each:

The following teams were previously eliminated and will remain at 1 icon per team:

While players can be treated to the new icon increase for the time being, keep in mind that only the 4 teams advancing to the Semifinals will remain in abundance on July 2 starting at 00:01 MHQ time. Since we made some updates to allow the eliminated teams to remain on the map with 1 icon a piece (rather than remove them entirely), we’ll provide an updated schedule here:

That means that all teams who make it to the final two matches will remain on the map from July 2 until the conclusion of the Coupe du Munzee specials on July 7 at 23:59 MHQ time, at which point all icons will leave the map. However, after the Coupe du Munzee specials leave the map, we will have a special surprise celebration for the winning icon! Stay tuned for more details!

How many Coupe du Munzee badges have you earned so far? Hopefully your team is still in the race!