Gallop away with Flat Hammock!

The Flat Friends are about to make a new pal! Flat Rob, Flat Matt, and Flat Lou will have to watch their gameplay, because the ban hammer is knocking- welcome the all new Flat Hammock! 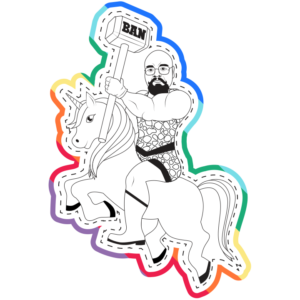 This new game piece is based on the one-man wrecking crew Daniel Hammock, who has been running Munzee Support for 5 years. No one at MHQ can think of a time when they’ve actually called him Daniel, or Danny as his family calls him. He’s always affectionately been known as Hammock. Although he started off as a player, in Hammock’s own words, his “dream came true” when he was given “the opportunity of a lifetime” to work for Munzee. Even before officially joining MHQ, Hammock always took it upon himself to help out the Munzee community with any and all issues that would arise. He is best known within the community for swinging the ban hammer, punishing all those who break the code of conduct. To those who know him well he’s a fluffy unicorn of a guy who is very kind and giving. In his free time he enjoys taking his family out for crazy Youtube adventures for the Munzee Monthly Giveaway and giving away prizes each month for players to enjoy. He’s also an avid fan of unicorns, if the Flat Hammock design didn’t make that very apparent.

The first Flat Hammock has been released as a permanent special in Gettysburg, PA. Players will normally be able to purchase their own Flat Hammocks in the Freeze Tag Online Store for $4. In celebration of our new Flat Friend though all Flat Munzees will be discounted! Remember that Flat Friends are not always on sale, so stock up while you can!

The Flat Friends Sale will last until Friday at 15:00 MHQ:

Players with a Premium Membership will also receive one free Flat Hammock as well.

Like the other Flat Friends, Flat Hammock has a unique release schedule. Hammock may love working for Munzee, but he keeps busy with a variety of other jobs as well. Like other Flats he will choose when Flat Hammocks are available on the map, which will be during his working hours, major event seasons and more. Please note that all scheduled times are based on MHQ time and are subject to change. Since we’re in the middle of Halloween events though, all Flat Friends are on the map until the end of the month and Flat Hammock will join in the fun too!

Here is the general breakdown of Flat Hammocks:

Flat Hammocks’ proximity is not affected by other munzees except other Flats. Flat Hammocks must be 50ft from other players’ deploys and 150ft from your own deploys.

You’ll also be able to earn a variety of badges for capturing and deploying Flat Hammocks.

Don’t forget about DOUBLE POINT FLAT FRIENDS WEEKEND! On Friday we challenged our players to attend events and capture event pins, and they successfully completed the challenge! There will be double points on all Flat Friends captures and deploys beginning October 26 at 00:01 until October 28 at 23:59. That’s MH-BOO Bash weekend too, so if you’re looking for somewhere to deploy why not check out McKinney, TX! The calendar is also full of events all month long!

Thank you all for your support of the Support Man himself. Our Flat Friends line of munzees would not be possible without the enthusiasm of our players. Of course a huge THANK YOU to Hammock for his dedication to this game. So beware the ban hammer, hug Hammock when you meet him and Munzee On!