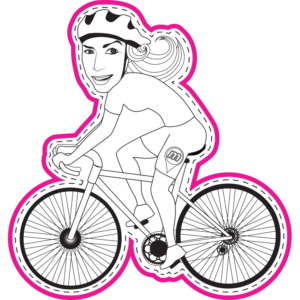 What we love even more than extra points is the fierce lady behind them, as well as her crew of fellow empowered female cyclists. Louise will be joining her new cycling team the InternationElles, whose goal is to bring attention to the fact that there is a gender gap in the world of cycling. This is most apparent in the Tour de France which does not allow women to participate or offer a women’s version of the complete race. To demonstrate their disagreement with this dated system, female athletes from around the world will be clipping in and pedaling for equality. The InternationElles will ride the entirety of the Tour de France route, completing each stage the day before the men begin their sanctioned race.

Each year the French cycling team Donnons des Elles au Vélo J-1 ride the entirety of the Tour de France route before the men begin their sanctioned race. This year the team invited an international group of women to join them in their peaceful protest. The InternationElles is comprised of a team of 10 women from across the globe united in the quest of promoting women’s cycling as they bike for gender equality.

The InternationElles are entirely self-funded, leaving them on the lookout for sponsors and partners to unite in their cause. Inspired by Louise and her team’s dedication and in unity with their cause, the Freeze Tag Team is proud to announce our official support of the InternationElles on this International Women’s Day.

In celebration of International Women’s Day a portion of the proceeds from every Flat Lou purchase this weekend will go toward Freeze Tag’s sponsorship of the InternationElles. You can pick up your Flat Lou at the Freeze Tag Online Store to show your support!

For the past four years, the Donnons des Elles au Vélo J-1 have biked in protest to stand up for women’s cycling, which is shockingly still marginalized in a year as progressive as 2019. The goal of the peaceful cycling protest is to change opinions about the capability and role of women in cycling. Just this past week, a major cycling race in Belgium had to be stopped after a female cyclist caught up to the men. The solution? “Neutralizing” the race in order to reinstate the gender gap.

After decades of fighting for an equal foot in the race, women are still excluded from the Tour de France. Female cyclists have been fighting to establish a sustainable women’s stage race that can rival it, with their efforts dating back to 1955. A host of issues, included financial burdens, organizational struggles, media bias, and mockery, have held female cyclists back from participating in a race filled with the same caliber of prestige as men are allotted.

While the exclusion of female cyclists from the world’s biggest cycling race embodies an underlying current of sexism and exclusion in the event, in a fuller sense, Louise and her fellow female cyclists are striving to bring overall awareness to gender inequalities in cycling. The Donnons des Elles au Vélo J-1, InternationElles, and countless female cyclists from around the world are faced with continual disparagement that prohibits them from participating in their sport on the same caliber as their male counterparts.

Threaded throughout the sport of cycling is an undercurrent of sexism, from podium girls to select cycling company advertisement. Female cyclists pack in the same grueling training regimen as men, yet they are faced with prize money discrepancies, lack of women’s races, and lack of race coverage in the case that events do take place. These continual practices put female cyclists at a constant disadvantage, a position which this band of innovative ladies is hoping to eradicate and redefine.

Stay tuned for future updates about Louise, her team, and their cycling quest. The entire group of empowered female athletes will be preparing for their over 3,400 kilometer bike tour this July. The ladies will start in Brussels on July 5, concluding their race in Paris on July 27, demonstrating their athletic prowess.

You can show your support for Louise by deploying your own Flat Lou this International Women’s Day!