While you’ve all been busy capturing the treacherous Jewel Thief on precious stones all month, a new stealthy fella is roaming the halls of Hotels and Motels worldwide. He claims he’s just here to help you with your bags though, so be sure to leave a tip for the new Bellhop Nomad Munzee! 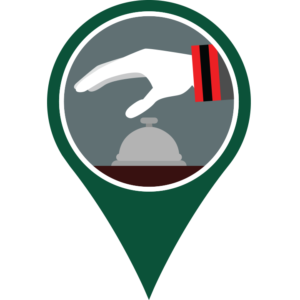 10 Bellhop Nomads are now bouncing on Motel and Hotel Munzees every 12 hours or until captured. Note that the Bellhop only bounces to physical Destination Munzees though, so it will not fall on Virtual Resort Munzees.

These nomads will count toward the new Nomad Badges that were recently released as well.

Since capping a Motel/Hotel usually means multiple caps and also a deploy if there are rooms left, we figured we’d go ahead and answer a few questions that might pop up:

1) What happens if I cap a Bellhop Nomad on an already capped Motel/Hotel?
You will get the points for the Bellhop Nomad, but you won’t get caps for the rooms again.

2) What happens if I cap a Bellhop Nomad on a not yet capped Motel/Hotel?
You’ll cap the Motel/Hotel as a nomad and additionally cap the rooms like you would have normally.

3) What if there are rooms available?
You’ll deploy a room like normal, as long as you do not already have a room since this would be case 1.