Agents, ZeeOps HQ’s system has been hacked and all of our files on past missions have been erased! You’ll have to recreate past Operations in what we’re calling LegaZeeOps. It’s up to you to keep the legacy of this organization in tact. The missions for this month are the same that were previously available in March 2018’s Operations.

Agents, seemingly out of nowhere the Mean Green Gang has made it’s presence felt in a BIG way. They have publicly announced their return and opened towering new headquarters in a number of major cities. What could they possibly gain by making their crime syndicate known all across the world?

The Mean Green Gang has a new battle plan- an international PR campaign! They claim to be called the “Miracle Green Group” and are a beacon of hope and world peace. We can’t allow the public to be tricked by their propaganda. It’s up to you to defeat the Mean Green Gang once more and expose them for the villains they are!

October 2018 ZeeOps Operations are now live and you can begin planning your Missions to start on the following day. You can plan your Operations at munzee.com/ops/ and purchase more ZeeCred in the Munzee Online Store. Remember that if you hit a snag at any point in your Operation you can use the new Mission Mulligan feature to keep going!

Since the focus of this month’s Operations is sure to make you green with envy, why not stock up on some new Urban Camos or Generics? Load up your supply in the Freeze Tag Online Store! 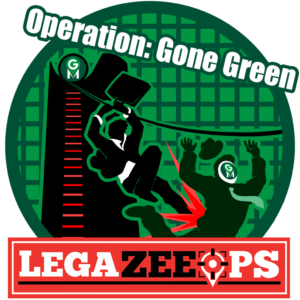