Over the past few months, we’ve been trying to refine our MunzPak programs by listening to feedback and requests from subscribers. This month, we’re implementing some new changes in response to that feedback. October’s Physical MunzPak includes only physical stickers. While we will still be including generics, any special munzee types will be included as stickers and not credits.

We’ve also changed how the stickers are printed. All of the items included in this month’s Physical MunzPak are on one sheet. The layout for this sheet is below. 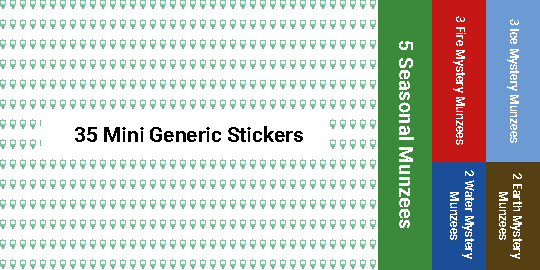 There will also be an insert included in the MunzPak envelope that explains this.

The new Seasonal Munzee is similar to the Evolution Munzees in that it changes after a period of time. The Season Munzee will change to the corresponding season on set dates:

Proximity Rules: 150ft from your own munzees; 50ft from other players’ munzees

We hope you enjoy the new Seasonal Munzee as well as the changes to MunzPak! If you’re not a MunzPak subscriber, you can subscribe here.