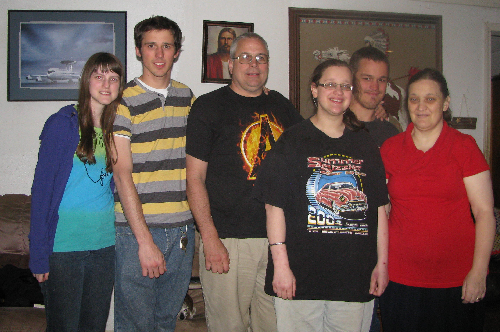 Player of the Week Mark Holmes and a special Team Munzee announcement!

We are the Holmes family. Mark and Roseanna Holmes, Kevin and Katlynn Holmes, Tony, and Melissa. The family Munzee name is (Rosemark). I, Mark Holmes, Munzees under the name Rosemark. Roseanna has her own account (Tupperose). Kevin and Katlynn Munzee under (Computerwiz41). Tony and Melissa are special needs adults and Munzee with the family.

Where in the world do you live? Noble, OK USA

How long have you played Munzee? Just under a year.

My family is an avid team of cachers for the same reasons that we are into Munzee. At a caching event, we were introduced to Munzee by another player, Team2MM. I found it intriguing and saw it as a perfect park and grab game, but it was weeks later before I actually tried it. I was hooked on my first night out because my two special needs children thoroughly enjoyed it.

The family atmosphere. Having special needs children/adults (they are grown but will live at home forever), it is a wonderful activity for the family that they can fully participate in and it is therapeutic to their social and physical needs.

What is on your wishlist?

I would like to see more special badges and special icons that the family can pursue and achieve!

I am a retired Police Officer of 23 years on the force, and now work for a well-known convenience store. My wife, Roseanna, is a stay at home mother. My son Kevin and his wife Katlynn live nearby. Tony and Melissa are special needs adults. They have Fragile X Syndrome, a genetic disorder that causes physical and mental disabilities. As a result of the Fragile X, Tony has also been diagnosed with Autism and Extreme ADHD. Melissa is legally blind without her glasses, but can see sufficiently to get by with glasses. Both are developmentally delayed to the mental capacity of approximately nine years of age. This is why Munzee is such a great advantage to our family as both Tony and Melissa thoroughly enjoy the hunt and it helps them physically and mentally in their development.

Thank you for your support during this Autism Awareness Month!

Mark and his family have shared their awesome Social Munzees with us. Check them out below and then scroll down for a special announcement from the Team!

To celebrate and bring awareness to April’s Autism theme, Team Munzee has deployed 680 special icons on the map. 680 represents the 1:68 ratio of children born with autism currently. These special icons will be placed on the map only on regular greenies that aren’t in maintenance mode.

When a heart has been captured the icon will bounce somewhere else in the world, only one capture per heart at a location.  Any player may capture the icon, even on a Munzee you have captured previously.  The only exception is if a heart lands on a Munzee you own, you are never able to capture a Munzee you own.  You will earn a special capture heart icon for each heart you cap.  If the heart isn’t captured within 6 hours it will move on to a new location around the world.  The points for capture will be exactly like a diamond, the owner and capper will split a sum of 20 points. For example, 7 for cap gives 13 for owner, 9 for cap gives 11 for owner.  Hearts will remain on the map until the end of April, so stay patient and keep one eye on the map.  We encourage you to show your support and cap as many as you can!  In order to show our support for this cause, Munzee will donate 50 cents for each heart captured to an autism charity selected with the help of the Holmes family.

A special map has been created at www.munzee.com/autism to help players find these special icons on nearby munzees!  Premium members can also use the “specials” filter online and in app.   **Don’t forget to watch for a nearby Munzee Rover while you are out there!**

$5000 donation made to Doug Flutie Jr. Foundation for Autism after researching organizations making the best use of incoming funds.  Thanks to all Munzee players for capturing hearts and raising Awareness for Autism during the month of April.  Keep making a difference while you grow the map!