Player of the Week: Mette and Lars Kristensen (MeLa)

As Munzee has grown over the years, the game has evolved in so many more ways than any of the co-founders could have imagined. We’ve certainly had our fair share of growing pains, but in its essence Munzee has tried to stick to its core goal of getting people out into the world. No one knows this better than those players who have been with us since the beginning. This week’s Player of the Week is Mette and Lars Kristensen (MeLa).

Who are you?
Mette and Lars Kristensen, aka MeLa.

Where in the world do you live?
In the village Harlev, just outside of Aarhus, the second largest city in Denmark.

How long have you played Munzee?
Since May 2013. We started up slowly with a few captures and deploys, but we got addicted after joining our first Clan battle in  June 2014.

How did you find Munzee?
We had been caching for several years but had almost stopped completely after adding two little girls to the family. Munzee was mentioned in a caching forum, and it had to be tried out. It quickly proved much easier to grab some Munzees without doing a lot of planning up front.

What do you most enjoy about Munzee?
We both really like the social aspects of the game. After joining a clan of local players (Jutlandia), we have met a lot of great people. We enjoy going to events and more informal meetings, too.

It’s also great interacting with players all around the world. Mette does a lot of social trading, and we are both in several Munzee-related groups on Facebook.

We also really enjoy chasing down the bouncing specials, Mythological as well as seasonal. It’s a great addition to the game.

Finally, the fundraisers! We think it’s great when Munzee does charity fundraisers. Do a bit of good AND make points – what’s not to like?

What is on your wish list?
Some day we would love to be able to travel abroad to a big event like MHQ Bash or Munzee Madness. And to a lot of a clusters around the world.

It would be great if the deploy process for physical munzees could be changed a bit such that the munzee wouldn’t actually be deployed until after naming it, adjusting for position, and optionally converting it. Among other reasons, it would make it possible to back out of a deploy if it turns out you can’t convert it to what you wanted.

Oh, and more badges! There can never be too many badges.

Finally, we wish that we hadn’t forgotten to capture a munzee on day 300 in our capture streak.

Tell us about yourself!
We have a combined age of 78 years and originate from different parts of Denmark. We met 11 years ago while working as volunteers, raising funds for the Danish Muscular Dystrophy Association. Together, we have two girls, Maja (5) and Ida (3), and a dog.

Lars says: You can call me a geek, and I won’t be offended. I work as a software developer, currently within the health IT industry, building software for hospitals. Some of my spare time is spent developing and maintaining the MunzStat app (Android only, sorry Apple fans). I really enjoy being able to contribute to the Munzee community while having fun and learning a lot in the process.

Mette says: I’m a socialholic. There, I said it. Searching for socials I haven’t captured yet is fun and time consuming. But I like collecting stuff. I hope there will be a badge for 10,000 socials when I get there. Just around 3,000 to go. I wish capturing a social awarded you with just one point, then more people would probably get into socials.

Other hobbies include:
Lars: I play electric guitar in a local rock music cover band which is great fun!

Mette: Does Eventzee count as a hobby? (Editor’s Note: Dylan says yes, yes it does.)

Any last words?
To anyone involved in our nomination, thank you! This wouldn’t have happened had it not been for MunzStat. Thanks for all of the positive feedback. It really means a lot and keeps up the motivation. Also, thank you Scott Foster and Daniel Fischer for your help and support.

MeLa also included some socials, so cap away! 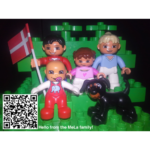 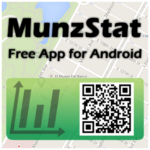 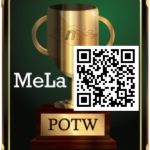