As Munzee has grown over the years, the game has evolved in so many more ways than any of the co-founders could have imagined. We’ve certainly had our fair share of growing pains, but in its essence Munzee has tried to stick to its core goal of getting people out into the world. No one knows this better than those players who have been with us since the beginning. This week’s Player of the Week is Michael J. Shuda (WRASLN).

In the Munzee world, I am WRASLN. My Munzee experience and training is thanks to the friends we have met through the group of Minnesota Munzers. (In a TV game show, W R S L N are the free letters in the bonus round… That has NOTHING to do with me.. My vanity license plat says “WRASLN” because I have been a wrestling coach since Forever.)

Where in the world do you live?
…born in the North Woods of Wisconsin
Spent a lifetime as a teacher and coach in small-town Arcadia, WI.

…Now, Munzee hunting out of Faribault, MN and the Twin Cities area.

We “live” in Munzee Land… any place we can get a GPS lock.

How long have you played Munzee?
Since July 25, 2014. (But, I have been practicing ALL my life: searching for my keys, phone, toys, etc.)

How did you find Munzee?
Munzee found ME! Stacy found Munzee through PostCrossing.com.. sending and receiving Post Cards from around the world. We played as GreenHeron until she gave me my VERY OWN account. Then, we went to McKinney, TX for the first Bash. That’s the day that I pledged to CoachV that I would be his Assistant Coach.

What do you most enjoy about Munzee?
Dad trained me to be a Hunter, Tracker, Finder, and Fixer. So it’s the challenge of the hunt: a Pine Tree hide by ASLGIRL, psycho analysis of a hide by Warped6, or tracking GeoMatrix who says “Walk it Baby”.

However, as a coach and a teacher (First, Last, and Always)… it’s meeting and helping people; that’s what I enjoy the most. PLAYING the game is great fun and exercise, but introducing beginners, developing clans, and “Growing the Map” are the most rewarding experiences.

Tell us about yourself!
We recently celebrated our 72nd wedding anniversary! (72 MONTHS. We got a late start, so we celebrate often.) Six years ago, I retired to get married. I don’t know how anyone can be married Full Time AND have a job, too!

My whole life had been about Teaching, Coaching, and helping others. (In 2009, I was presented with the National Assistant Wrestling Coach of the Year – Scholastic Division.)

With the opportunities for Munzee in the Twin Cities area, I realized that Munzee could CONSUME my life, so I had to focus my energies. “Clan building” seemed to be a way to help the greatest number of people and to grow the map. It looked like the MN Munzer Mayhem Clan might have room for a coach. Mayhem had a great group of competitive players, but if we recruited TWENTY players, they could sorted into TWO clans with complementary goals. (And THREE clans working together would allow players to trade levels from month to month.)

It was exciting when Mayhem Clan made Super Chuck – Level 5… TheFinder13 needed points, so she chased Warped6 and I as we deployed every munzee we had… She made the level by deploying the LAST greenie we had amongst us! We made it!!

Great disappointment followed 48 hours laters while making the clan rosters for the next month. I “stepped out” of the Mayhem clan to allow someone from the Minnesota Munzers Clan to step up. I WAS LOCKED OUT. There was no time and NO CHOICE, but to start a NEW clan. Calling in “favors” from friends, relatives, and strangers. It can take OVER and HOUR to put a new clan together. Stacy picked out the new name: “Must B QRazy Clan”.

Unfortunately, this scenario has played itself out several times. Fortunately, we now have well over 70 players (7 clans) working together to get as many FREE clan rewards as we can from Munzee!

My next goals are to develop new players in new areas with Munzee 101 and a few other ideas I would like to toy with.

Any last words?
I admire the founders, developers,  and staff of Munzee.. They have created something that did not exist in the world.. a new activity, a new thought process, a new challenge, and a new culture! A whole group of people now have a chance to tap into talents and skills we hadn’t realized, and interact on a global level. The people of Munzee are me HEROES!

Thank you to all of the other players who have touched our lives, especially the new players who are bringing so much excitement and comradery to the game: Minnesota Mosquitoes, Minnesota Nice !, Greenies, Puppies, Must B QRazy, Minnesota Munzers, and MN Munzer Mayhem.

And thank you to our system of Clans for working togther,

P.S. I have lost about 50 pounds since we started playing Munzee. We are surrounded by wonderful parks! Many evenings, Stacy takes me walking around a lake or park for about 3 miles. She morphs into a “Munzer-of-the-Night” when we see there is “One MORE Munzee” just ahead!

Thank you, Munzee, for influencing our lives.

WRASLN also included some socials, so cap away! 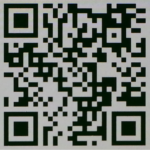 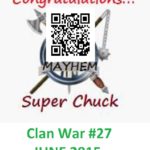