While the year started off quietly, it seems we’ve just gotten the most bizarre case yet. The town of Flatville has got a vandal on the loose, which ordinarily wouldn’t raise much alarm — but the unique monochrome aesthetic of the town has been ruined, and the clean-up will cost millions. If you complete ALL the missions in Operation: Swatch Out!, you’ll receive the snazzy badge below, along with the FREDDi Fr0g Mech (more info below!) and various other rewards listed in the app! 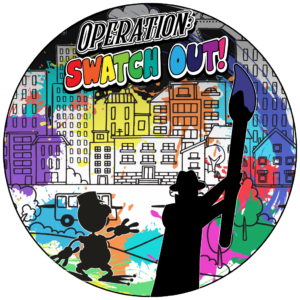 Like the other Munzee Mechz, FREDDi Fr0g is a temporary POB that will remain on the map until it has been captured 15 times.

You can find this artistic amphibian tagging the landing pads above every 6 hours or when captured.

FREDDi Fr0g will be available for multi-capture. That means players can capture FREDDi Fr0g on their own munzees, any previously captured munzees, and more than once if the same FREDDi Fr0g visits you. FREDDi Fr0g is non-blastable. He will be attracted to both Physical Magnets and Virtual Magnets. You can access FREDDi Fr0g by turning on your “All Expiring Specials” filter.

When FREDDi Fr0g is captured, it will scatter up to 3 BLOTerflies.

As with other Munzee Mechz, the badge for deploying FREDDi Fr0g depicts the Blueprints, and is shown below: 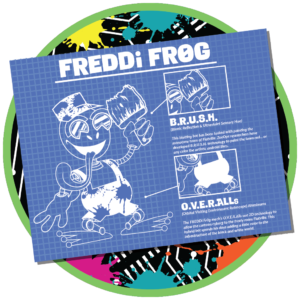 There is also a badge for capturing FREDDi Fr0g. Since there’s only one badge in this line, we’ll keep it a secret for now.