There was a lot going on this weekend with Flat Robs on the map, Leprechauns bouncing at an accelerated rate, and 3x points on some of our favorite green munzees. We love seeing gameplay statistics, so we decided run the numbers on this past weekend. All we can say is “wow”.

Seven munzee types were included in the 3x Point Weekend: Greenies, Dark Green MVMs, Light Green MVMs, Green Mystery Virtual Munzees, Green Virtual Munzees, Shamrock Munzees, and Emerald Munzees. During the weekend, there were 407,870 captures of these types including 92,787 on Friday, 165,356 on Saturday, and 149,727 on Sunday! 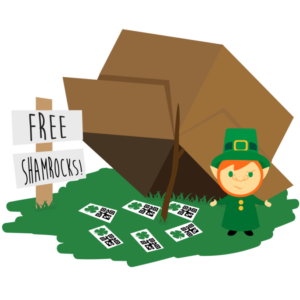 We also had some extra badges for capturing Leprechauns and Greenies this weekend. You stepped up to the challenge, and 716 players earned at least the first of the three badges! There were 3,349 Leprechaun captures and 201,198 greenie captures over the weekend!

We hope you all had a great weekend, and we can’t wait for you to see what else we have coming up soon!

Challenge Accepted! – Rob and Matt Head to Tyler
Join Rob and Garfield in Munzee, IN!