We’re excited to announce a new version of the Eventzee app (and logo!) will be available for download later this week! The latest version of Eventzee has been totally reworked to offer virtual events and scavenger hunts for any occasion.

As excited as we are for the Eventzee team, there will be a transition period regarding the new app. You can read all about the new features, exciting partnerships, and more on the Eventzee blog. The purpose of this announcement on the Munzee blog is to identify some of the key changes, and how they affect Munzee and Eventzee’s relationship.

The new Eventzee app is an entirely new build, so when the new app is available you will not update your current version of the Eventzee app. Instead, you will need to search for the new version in your phone’s app store. This means that the Eventzee database has been restructured as its own and will no longer be a part of Munzee.

Moving forward, Eventzee hunts will no longer be an additional add-on item for Munzee Events. This means that bonus points, and badges, etc will no longer be available for future events. However, this is subject to change as we develop our plan on incorporating this new app into Munzee events!

Please note that some Fall Into Spring events with Eventzee packages are still scheduled on the calendar. These will continue as planned, but players will need to use the previous Eventzee app in order to participate. The new app will be replacing the older app in the App and Play Stores at the end of this week. So if you wish to participate in these Munzee Event hunts you need to make sure to keep the older version of the app on your phone since you will not be able to redownload it.

Badges currently available to be earned in Eventzee will become legacy badges. Legacy badges earned will still show in the Munzee app, and any Eventzee hunts completed on the old system (for example at a Fall Into Spring event) will count toward them. The new Eventzee app will not show these badges.

The themed scavenger hunts sold earlier this year will not be available in the new Eventzee app.  Anyone who purchased these hunts will still be able to finish them using the old Eventzee app. As stated above, the old app will be supported for the time being, but you must have it downloaded to your phone before the new app is released.

We appreciate all of your support and hope that should your company, family, or organization need a customized scavenger hunt tool you look no further than Eventzee. This new app is top of the line, and will be able to offer more opportunities than the previous app has ever been able to. Thank you all again, we’re excited to see where Eventzee goes from here!

EDIT NOTE:  THIS IS LEFT HERE FOR REFERENCE ONLY. New information on the way and yes, there will be changes. Apologies in advance.

It’s Friday of Cyber Munzweek! Today, Virtual Trails are on sale for the first time! 5 virtual credits for $3, regular priced $5.

Each trail must be a minimum of 5 stops and can have a maximum of 10 stops.

To purchase a Virtual Trail, please follow the link to the Munzee Store to see Cyber Munzweek merchandise. 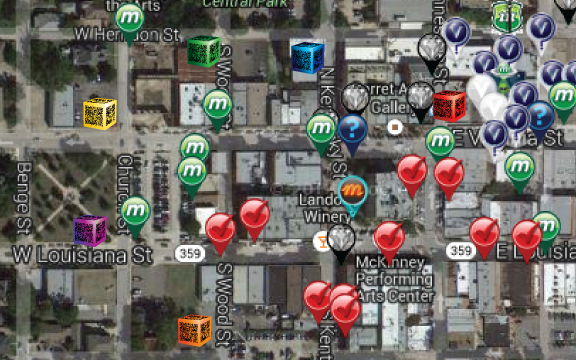 Welcome to the family!

We would like to welcome a new Munzee type to the growing family!

The Munzee stash is a colorful cube to be deployed with a choice of 6 vibrant colors.  The color you choose will have a unique distinction on the map, a special capture icon, and be 1/6 of earning a special badge.  Here’s a screen shot of each color deployed around MHQ:

The stash comes pre-loaded with 25 generic stickers to trade with players who find the stash. Another unique feature is the ability for the first five who find the stash to deploy their own sticker (included) on one side of the cube. The points will accumulate similar to the Munzee motel. Take a sticker, leave a sticker! It’s a great motto for the new stash!

Due to limited stock and shipping costs these items will be sold at Munzee events and through authorized Munzee resellers for the month of April on a trial basis.  Additional quantities will be added to the store soon when all shipping requirements are met.  Be sure to place your order today!

And last, but not least, THE BADGE!  When you deploy a Munzee Stash in each of the six colors available (red, orange, yellow, green, blue, violet) you will earn The Irish Badge.  This is the perfect badge to add to your collection.

We can’t wait to see the map light up with the colors of the rainbow and know you will welcome The Munzee Stash to the family!

Our players have chased down his socials all over the web.  And like a super-hero, he’s chased each of you down and reached out to support Men’s Health with Virtuous Virtuals all over the globe.  Always helpful and always smiling, this week’s Player of the Week is player batmanandrobin!  Successfully blending the world of Munzee with the world of Music Entertainment with Coxillah.com, Sean Miller can be found at a moment’s notice offering help to his fellow players and engaging our online community with a positive attitude.  He’s received the highest number of independent player nominations from the Munzee community, and we’re happy to highlight him!

Where in the world do you live?

How long have you played Munzee?

When my girlfriend and I started dating to keep our relationship going and keep us doing things together we would go on road trips throughout Michigan. One day we ended up in Mackinaw City and I had remembered where a previously found geocache was and we found a qr code attached to a sign near where the cache was supposed to be. We quickly downloaded and never looked back.

I enjoy how it forces me outside of my house and gives me something to do. I also love how I have been able to meet players from around the state and even some from outside.

Most of the things I really wanted to see have come out for me to enjoy, so right now I am very content with the game.

I used to start playing with my girlfriend but she has since somewhat lost interest in the game. Our real names are Sean Miller and Sarah Hitsman. I am a Junior in college at Oakland University and am a journalism major with a music and world music minor.

My main project I have been working on is my website Coxillah.com (visit and you may find some socials). The theme of the site can best be described as a sort of “Rolling Stone” and also does review and PR work for independent musicians.

My last ongoing project is my music. I have multiple songs in the works involving mainstream music elements and other world music aspects including Afro-Cuban, different African elements and some others that will hopefully combine into a great musical project that can help me pursue my dream as a mainstream musicians making a living off my music.

As a little shout-out to Sean, he’s provided us with a Social he’d like to share with the entire Munzee community:

Do you know a player that inspires you, or does their part to grow the world of Munzee?  Know a Munzee super-hero, or maybe just someone that makes you smile?  If so, send us a message at iLoveYou@Munzee.com with their name, player name, and your info as well!

The Munzee Oktoberfest celebration is underway!  It ends October 6.  Get out there and capture those icons!

September 21 at midnight CEST ( GMT +2 ) Munzee kicks off the Oktoberfest celebration!  This launch coincides with the Oktoberfest event which originates in Munich but is celebrated across the globe.  Munzee will celebrate from September 21st through October 6th.  We will place 3 different icons on the Munzee map which will “bounce” all over the world.  This bouncing will work the same as our birthday cake celebration with a shorter time limit per icon.

How to capture one of the Oktoberfest icons:  1) wait for one to land near you. 2) Check to see the amount of remaining time. 3) Gauge the distance and time related to your location.  4) Apply maximum speed allowed in order to get the capture.     ♥Munzee

And now the actual rules. Oktoberfest icons will land on REGULAR Munzees across the entire world. The first person to capture the Munzee before the 6 hour time limit expires will be awarded the icon and related points. Previously captured Munzees become active again when a special icon is attached. You may NOT capture a special icon on a Munzee you own. Premium members have a “Specials” filter for use in the app. If an icon is not captured within the 6 hour window it will jump to a new location somewhere else in the world.  There will be 333 of each icon active at any given time. This is a total of 999 icons circulating around the world. This increases the likelihood of players receiving a capture and earning more than one icon. Attempting to capture one of each icon is a great goal *hint, hint*  Sind Sie bereit, Oktoberfest feiern?  Dieses Video wird Ihnen im Geiste zu bekommen!

The Chuck is achieved when each member in the clan earns a minimum of 2500 points. But this isn’t all. Each member must also capture a virtual, mystery, and diamond during the clan battle timeframe.

What do you earn?

Get additional details in the help manual.  https://munzee.zendesk.com/entries/23543662-Clans

Just a reminder, Munzee.com will be down for upgrades tomorrow (July 10, 2013) from 12pm-3pm CDT. Mobile apps will still function fine and gameplay can continue!

On a related note, if you ever want to know the status of any of the Munzee Scavenger Hunt services you can visit our handy server status page at http://status.munzee.com/

Today we turned 2 years old!!!  Find the cupcake bouncing all over the world on the special cake map! These cakes will be active the entire month.  For more details about the cakes follow this link.  Don’t forget we are giving double points on ALL activity all day long!  13 hours left to get double points!  Happy birthday to us! Drop us a note and let us know how many cakes you’ve captured in our world wide scavenger hunt!