Surprise! A NEW Game Piece for A NEW Kind of Bash!

We may have had to cancel our annual MHQ Bash in Texas this year, but we’re still celebrating the only way we know how: BIG! We wanted to create something special to celebrate a worldwide virtual gathering in a new way, so we’re excited to announce the release of the Universal Munzee!

Like a combination between Social and Personal Munzees, the Universal will allow you to interact with your fellow players like never before. You can find out more about the product below, but first a little background!

We LOVE events, AND WE LOVE Personal Tags! The two seem to go hand in hand. Personals come in so many colorful designs to collect, and it gives players something to talk about: you can learn a lot about your fellow players by the tags they’ve collected. We even have a special badge line highlighting this phenomenon!

That aspect to the game is definitely something we miss this year, and while players have used their creativity to host events that allow their attendees to still have fun while keeping a safe distance from each other, Personal Tags, unfortunately, do require you to be in close proximity of wherever they’re deployed. Enter the Universal Munzee!

Featuring the logo for this year’s theme, “Bash from the Past!“, it has the best of both Social and Personal Munzee functionality as other players can capture it from anywhere in the world AND activity on it will earn you points. However, as this makes it incredibly valuable, we are limiting it to 1 per player. You can find this limited edition Universal HERE!

This Bash Universal is a limited release item only available through October 1 at 10:00 MHQ. 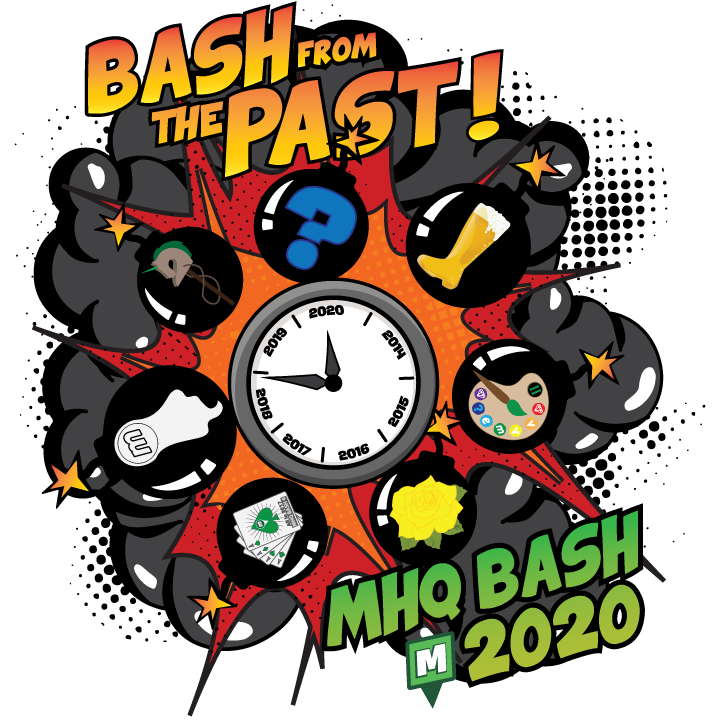 A Universal has the same point structure as a regular Personal:

For now, you can find your Universal in the My Social Munzees section of the app, or the corresponding page on the website. For more information, check out the Help Guide article.

To share your Universal Munzee QR code for others to capture, go to the Social Munzees list in your in-app profile and slide the entry to the left to reveal the [Show QR Code] button. You can take a screenshot of the code on your device, then send to others! Or you can always access and download the QR code from the website as well. 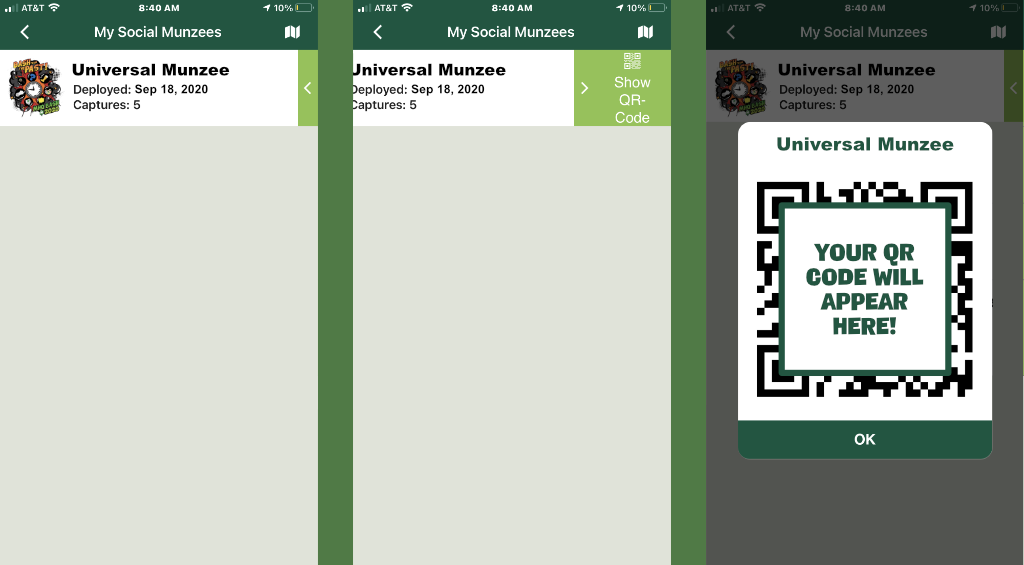 Bash From The Past!

We’ll have more information regarding this year’s celebration next week, but prepare for a trot down memory lane! MHQ Bash has become a staple over the last 6 years, so we thought what better way to celebrate 2020 than by looking back at years that were maybe a bit more stable!

The Universal is just the first announcement in regards to our Bash From The Past. Please indicate your intentions to participate in our global Bash on the Event Calendar. More information will be shared Monday about our plans for this annual celebration that we’re taking global this year!

Valentine’s Day is right around the corner, and we’re feeling the love! From now (12:00 MHQ time on February 8th) until February 15th at 23:59 MHQ time, we have multiple products on sale in the Munzee Online Store, including:

You can find all of these products here. Keep an eye out for additions to this sale as well as something special that’s a bit mysterious. 😉

Have fun, and Munzee on!

It’s Groundhog Day here in North America! Punxsutawney Phil may have predicted 6 more weeks of winter, but we’re hoping he was wrong and looking forward to some better weather. In that spirit, we’ve having a Groundhog Day Sale! From now (12:00 MHQ time on February 2nd) through Sunday, February 4th at 23:59 MHQ time, you can get 10% off already discounted prices of a selection of physical munzees (or credits) including:

You can find everything on sale here.

Happy Groundhog Day, and Munzee on!

The holiday season is here, and Christmas is fast approaching. Whether your still looking for the perfect gift or you just want to treat yourself, we’ve got you covered with our 10 Days ‘Til Christmas flash sale!

Beginning now (10:00 MHQ time), you can get 10% off everything in the Munzee Online Store when you use the discount code 10DAYSTILCHRISTMAS during checkout.

This sale will run through 10:00 MHQ time tomorrow, December 16th, so don’t miss out!

UPDATE: Online store links have been added to each of the new items for sale below.

We’re excited to announce that a few new items will be added to the Munzee Online Store! These new Munzee and WallaBee items will be available for sale on Wednesday October 4th at 15:00 MHQ.

To celebrate our MunzFit 2.0 events, we’re releasing a Munzee Coin featuring last year’s cycling logo. The soft enamel coin can be logged and discovered in the Munzee app, so it’s perfect if you plan on attending a few MunzFit events.

This brushed metal honeycomb coin features the WallaBee mascot and was another awesome item introduced at MHQ Bash. This coin may be a WallaBash keepsake, but it can also be logged and discovered in the Munzee app as well.

WallaBee Passports are just one way to interact with the game and community. Each passport comes with your very first sticker, straight from WHQ. Additional stickers will become available through future monthly package options, as well as participating events. This is your chance to take part in WallaBee’s history with this fun commemorative commodity.

Over the weekend, MHQ Bash attendees were given the chance to look behind the veil at what Team Munzee does in its free time. We introduced them to a new team building project we’ve been working on called TazkMaster!

Based on the British comedy game show Taskmaster*, our version sees the Munzee staff split into teams and tasked with completing bizarre and vague challenges for points. The teams are given very little information regarding how they complete their Tazks, so they have to work together to succeed.

Prior to the MHQ Bash reveal, the teams had no clue what they were doing or how they were doing compared to the other teams. At Casino Night Friday, TazkMaster Rob and Tazktician Dylan unveiled a compiled video of the first two Tazks.

Objective: Thaw out the hidden Ice Munzee and scan it for points. You can use objects that have been hidden around the room, but you must be quick.

In this challenge each team had to thaw out an Ice Munzee from a bowl of frozen water. They could use any items in the room to access the munzee, but not all items were easily seen. Some of the teams were quick to crack the code, while others just blew a bunch of hot air.

Objective: Your team needs to put their heads together to fill out the Munzee Alphabet Zoup form. Name as many munzee types as you can for each letter of the Alphabet in under 2 minutes. A is for Amethyst, B is for Battle Axe, etc. Each letter will only count once.

For this Tazk our teams had to come up with a munzee for each letter of the alphabet. Easy right? Well for a group who works 40 hours a week with Munzee, you might expect a little more out of us…

Finally, after revealing the videos of the first two Tazks Friday night we announced that a third Tazk was going to be preformed live in front of the audience! While the video for this won’t be released for a few weeks, we figured we could let you all in on the worst-kept secret in Team Munzee history.

Objective: Show the crowd at MHQ Bash a good time and come up with some Munzee Melodeez. Using your team’s instrument, write a Munzee-themed jingle set to a well known song’s beat. You have 15 minutes to plan your song in private. Encourage the crowd to sing along and wow the TazkMaster who is judging the jingles.

In the middle of Friday’s Casino Night event, Dylan pulled the team’s away individually to announce the surprise Tazk. Each team had 15 minutes to prepare their songs and surprisingly there were some bonafide hits!

Be on the lookout for the compilation video soon, as well as the updated team scores.

We also announced that Tazk 3 was just the beginning of these TazkMaster shenanigans. Throughout the coming months we’ll be challenging our teams more and more, with a grand finale at next year’s MHQ Bash. You won’t want to miss out, so keep up with our Tazks as they’re released and join us again next year at MHQ Bash 5! 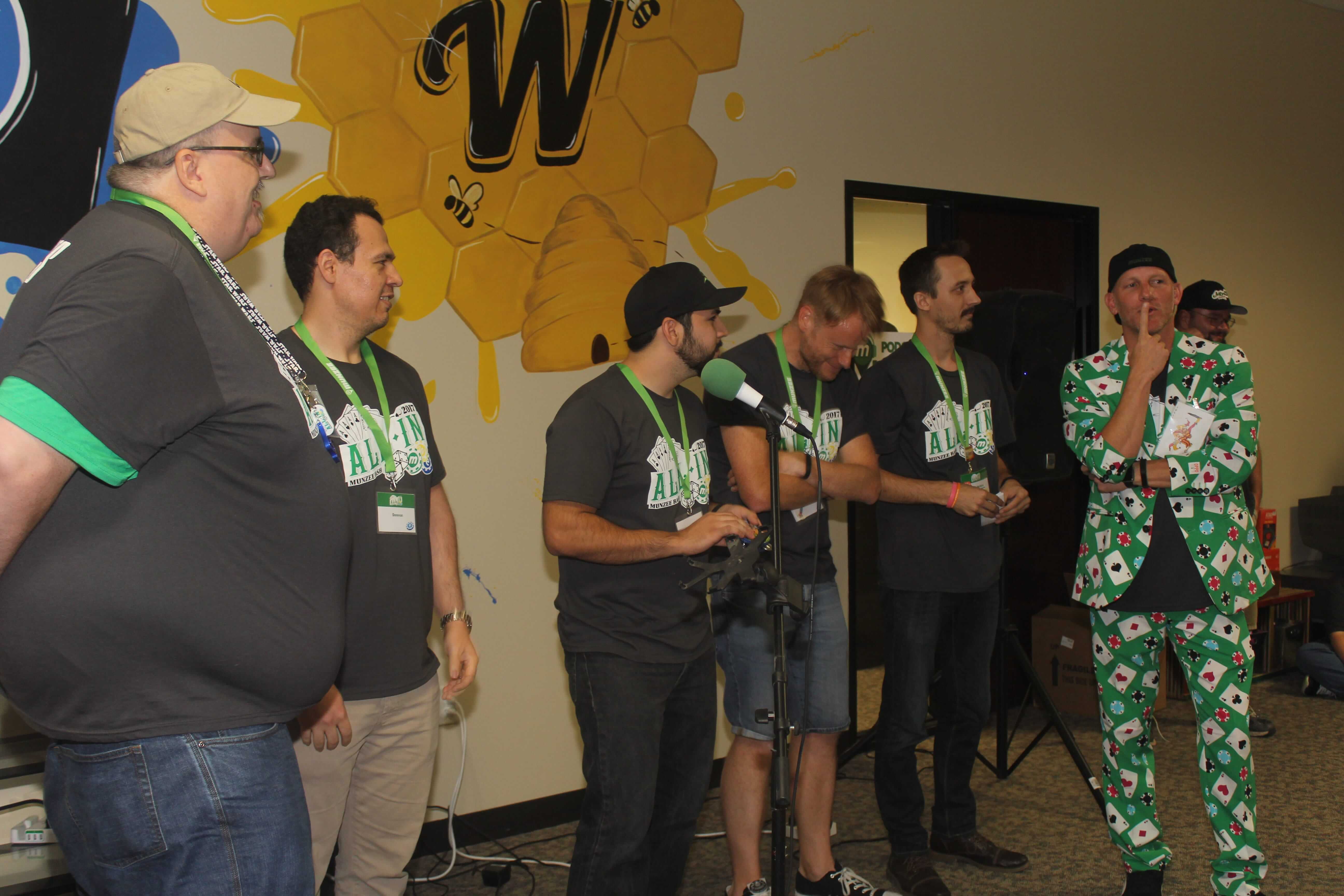 Rob with some Macho Men after their Munzee Melodeez performance.

*Please note that we don’t have anything to do with the British game show Taskmaster. This isn’t a tease of something else to come, just a fun team-building exercise internally. It just happened to turn out very funny and worth sharing with our friends worldwide!

We introduced Personal Munzees as a way to incorporatea more social aspect to the game while allowing you to earn points. Since then, Personals have taken on a life of their own in the game. Now, we’re introducing the next step: the Premium Personal.

On the next page, you will see a space to enter the URL for one of your other Personal Munzees. NOTE: This ONLY works with Personal Munzees, and they must be owned by you.

After you click “Link Munzee”, your Personal Munzee will show up underneath the URL field. You can manage the Personals linked to your Premium Personal on this page.

Premium Personal Munzees will be launching TONIGHT at MHQ Bash. All attendees who purchased a package (this does not include the “Ace High” free package) will receive a Premium Personal (seen below).

We hope you enjoy the new Premium Personal Munzee!