Last year we created the Time Capzule to give a lower-pressure, mailbox-like scatter experience each month for those interested. The scatters were designed around core Munzee “Memoreez”, and if you owned one, we hope you enjoyed taking a trip down memory lane with us!

To make sure you didn’t forget to capture your Time Capzule, we scheduled reminder social posts somewhere in the middle of each month. In this month’s reminder (FB | TWTR | IG), we hinted at a surprise waiting for you… well, here’s the surprise! At 00:01 MHQ today, all players who’ve deployed a Time Capzule have had a NEW Mech deployed on their account!

Like the other Munzee Mechz, CAPPi is a temporary POB. CAPPi will remain on the map until it has been captured 5 times.

You can find these tubular treasure chests rolling to the landing pads above every 6 hours or when captured.

CAPPi will be available for multi-capture. That means players can capture CAPPi on their own munzees, any previously captured munzees, and more than once if the same CAPPi visits you. CAPPi is non-blastable. It will be attracted to both Physical Magnets and Virtual Magnets. You can access CAPPi by turning on your “All Expiring Specials” filter.

As with other Munzee Mechz, the badge for deploying CAPPi depicts the Blueprint, and is shown below: 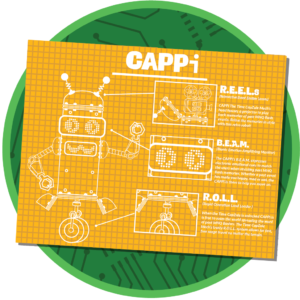 There is also a badge for capturing CAPPi. Since there’s only one badge in this line, we’ll keep it a secret for now.

We hope you enjoy spotting these golden cyborgs on the map!