As the year comes to a close we can’t help but look back on how big 2014 was! From special icons and big events, to huge announcements, 2014 is going to be a tough act to follow. Here we have the 14 best things about 2014, ranging all things Munzee. In no particular order Team MHQ has decided on what they think made the year so special.

MHQ Gets an Office!

MHQ may have hit the ground running in 2014, but at the end of 2013 they still didn’t even have an office! So when the 3 (at the time) full time members of the team moved into their new office in McKinney, TX they knew it was a start to a big year. Having a home base (that wasn’t Rob’s living room) solidified their full time role with Munzee and paved the way for the company’s growth. Little did they know that growth would come quicker than expected…

While the first office in McKinney was a huge step for Munzee, the 350 square foot space filled up quickly. After hiring Intern+ Matt and a month later UI Designer Peter and Master of Media Dylan, it was time to look at expansion. Even in the final months of the year our team began to grow more with development on both technical and business sides. Munzee will only grow from here- especially considering the growth of the company’s business ventures.

What started as a convenience store to provide the downtown McKinney workers with an affordable snack option has grown into something much bigger than anyone at MHQ could have imagined. The Munzee Marketplace is now McKinney’s premier option for local, organic, fresh foods. The Marketplace has partnered with various local vendors and has big plans on the horizon that make Munzee proud.

All the extra space from the Marketplace was handy for MHQ’s first official event. In connection with Downtown McKinney’s Oktoberfest Celebration, MHQ Bash featured three days of activities that nearly 200 people joined us for. After seeing some of the great events our players have thrown over the year, we knew we had to go big. We learned a lot about how to plan and execute events (a learning experience to say the least) and we know next year’s Bash will be even bigger.

Speaking of learning experiences, there’s still a lot the players have to teach us. Much like MHQ Bash, players have made their own virtual gardens for a while and needless to say we have been super impressed with what our players have created. So in connection with the emerald family jewel we made our first official virtual garden outside of McKinney and our players helped us fill it in. It took a little maneuvering and some help from our players with our design, but we’re proud of the new garden and excited to release more official gardens around the world.

President Rob Vardeman may have done a bit of Virtual Garden scouting during his world travels this year as well. CoachV started his presidency with an oath to expand the player connection and he has not wavered on that promise. For as busy as we keep Rob in the office he still made as many trips to as many events as possible this year. From Germany to California to Canada and everywhere in between, the President racked up the frequent flyer miles, sometimes squeezing trips into a 24 hour span- and enjoyed every minute of it.

It’s hard not to enjoy world travels, especially when you’re in Germany days after they won the World Cup. Rob got to experience just this during his trip to Cologne, Germany. To celebrate the world’s favorite sport, Munzee blasted the world with football special icons and held a competition where players could vote on who they thought would win in the Copa Do Munzo competition. As many guessed, Germany won the cup and Rob was on hand to reward the faithful football fans.

Much like the footballs that bounced across the map, this year featured a lot of special icons. From 8-bit ghostzees to non-exploding London dynamite, the unique and eclectic assortment of specials got players out at odd hours and in new places hunting for munzees. This year’s specials not only took the game to different levels, but also gave us an opportunity to do good for others as well…

The benefit of special icons is that they are constantly interchangeable and can be used in unique ways, like helping raise money for charity in a fun way. Our players came out in full force multiple times this year to use Munzee for good. The Autism Puzzle Hearts brought in $5000 for the Doug Flutie, Jr. Foundation, The RMH Virtuals garnered $25,000 for the Ronald McDonald House of Spokane, and the ALS Ice cubes raised $54,000 for Project A.L.S.. Needless to say 2014 was a big year in many ways!

July 2014 also marked Munzee’s official 3rd Birthday Celebration, or #FiestaThree as we called it. We kicked off the month-long celebration by introducing Ruby Munzees, held various events every third day of the month and even had Pinata special icons that players could smash open. The whole month was a huge celebration and our players even sent in special Happy Birthday pictures and videos for Munzee. Players also took advantage of Rovers in order to get the Birthday Barker badge. Speaking of Rovers… 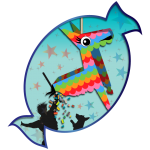 During one of his many trips this year, Rob and other members of Team MHQ announced the arrival of Rovers at Munzee Madness 3 in California. Rover is a supplemental piece to the game, and in fact a game within the game of Munzee. Rover is an extremely unique part of Munzee because although it is not a munzee type it encourages players to travel and expand their personal maps. Since its announcement in March, all the active Rovers in the world have traveled a whopping 61 million miles!

Another huge part of this year was the Munzee Clan Wars. Players battled it out month after month, fighting for that number one spot and the ever-glorious Super Chuck. This aspect of the game has shown MHQ how dedicated our players really are and the lengths they are willing to go in the name of Munzee. As we head into the new year we’re sure our players will take the battles to an even higher level and the Clan count will only grow from there!

In case you couldn’t tell from our world-traveling President, Munzee is all about transparency and our player relations are extremely important to us. So what better way to interact with our players on a weekly basis than with a podcast? Our weekly update on all things Munzee has evolved a lot over the year. We’ve recently turned our podcast into an interactive videocast that players can now ask us questions each week, which has furthered the connection we get to make with our players. Be sure to join us Tuesdays at 1 pm (MHQ Time) for the live videocast where you can interact with us, ask questions and see us stumble over our words!

As big as 2014 was, 2015 is going to be even bigger. Perhaps the biggest announcement of the year was the development of our new app Eventzee! The private events-based app will not only expand the Munzee events system, but will help our business grow to new reaches and in turn grow the Munzee map as well. We’re currently beta-testing the app and fixing any final kinks, but Eventzee will be a huge part of the new year.

Thank you to all of our players for a great 2014. We can’t wait to see what happens next!

Munzee: 2014 By The Numbers
Letter from the President